We use cookies to make your experience better. To comply with the new e-Privacy directive, we need to ask for your consent to set the cookies. Learn more.

The new and improved SS Yoke Bar is made for everyday use.

Designed to build your squat and pulls while saving your shoulders and back with our ultra-load displacing pad design.

New improved with stainless steel sleeves, 50mm so it will accept standard collars

*If planning to order from outside of the UK, please contact us directly for an up to date shipping price - ukcustomerservice@elitefts.net

Shipping prices are fluctuating. There will also be customs fees to pay within your country prior to receiving any goods we ship.

*Ships within 2 working days
If ordering from Europe please contact sbell@elitefts.net for a shipping quote

£480.00
Out of stock
SKU
DSEXF-BB-SSBAR-CHROME
Notify me when this product is in stock
Add to Wish List Add to Compare
Rating:
100% of 100
4  Reviews Add Your Review
Skip to the end of the images gallery 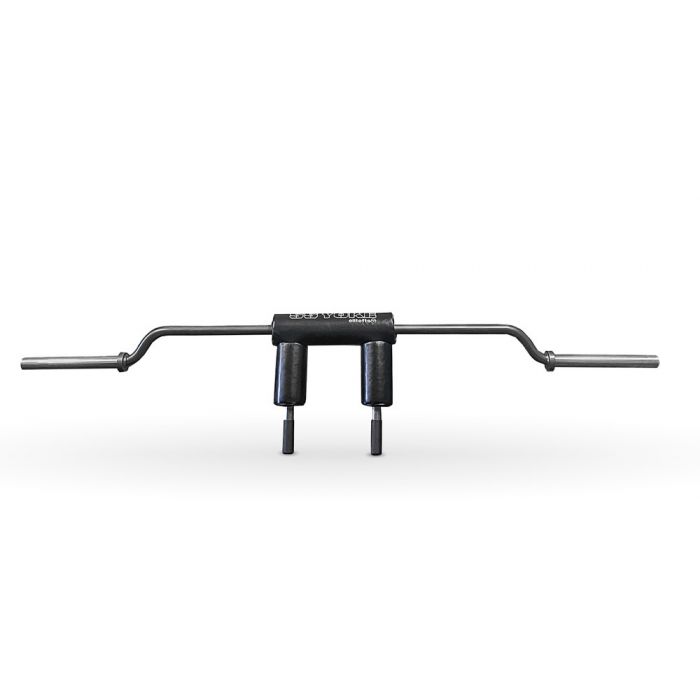 Skip to the beginning of the images gallery
Details

By now, there should be no doubt that every gym should have a Yoke Bar. This bar has withstood the test of time, has proven to be extremely effective with all training programs, and has become known as a "PR Buster" with strength athletes and coaches across the globe.

In January of 2012, we took on the task of taking a great product and making it better. This was first accomplished by touching base with existing bar users and inquiring about what improvements they would like to see. This was then added to feedback from Dave Tate who, due to shoulder injuries, has been exclusively squatting with this bar since 2005.

"Since 2005, the only way I have been able to squat is with the use of the SS Yoke Bar. When you extensively rely on a product week-in and week-out, you will inevitably begin to find its flaws. I went into this project with my own personal reasons...a better bar for myself, but as time and testing progressed, I began to see just how much of an impact the changes we were making were affecting the quality and feel of the bar. It took over 10 months, MANY bars, and MANY squat sessions to get this dialed in, but I strongly feel we have the best Yoke Bar ever created.
- Dave Tate
Founder elitefts™.com Inc


As we worked through this process, we quickly discovered that a small change in one aspect created flaws in others. The goal was to eliminate these negative aspects, not to create more. For example, making the pad denser (so that it wouldn't break down like all of the others) changed how the bar would sit and move on the lifter's back. The length of the handles also affected how the majority of lifters would come out of the bottom of the squat. In turn, the length of the bar affected the stability, the handle thickness, the stress on the arms, the length of the camber, the strength of the bar, etc. Therefore, this process— what we thought would be a couple of simple upgrades, became a major project. In time, however, we did get it done. This bar now has...

* A denser and longer neck pad that will not break down and sits perfectly on the upper back.

* Shorter but thicker handles that allow the lifter to support the bar without aiding in the lift or tossing the lifter into a compromising position.

* A longer bar camber that greatly increases the strength and rating of the bar. While we know this bar is rated over 1500 pounds, this really doesn't mean anything. We already know ratings are worthless in real world applications, as we all have seen MANY 1200-pound rated power bars bend with less than 400 pounds. Our real world way to test the strength of the bar is to load it with 600 pounds and ask LiL Stevie (6'5 350 pounds) to toss it off his back and onto the rack spot pins. With the "LiL Stevie method," we were able to find out what bars would bend, break, or stand up to the challenge. NOTE: It was also a blast to watch!

* Some other upgrades include, better packaging so your bar arrives AWESOME, higher quality handle grips, a clear coated finish and stainless steel sleeves.

This bar is great for...

* All types of Squatting

The measurement between cambers is 128cm.  This bar weighs 30kg.

Reviews 4
Write Your Own Review